Keith’s anti bullying and anti suicide assembly, “Break Out of The Box”, addresses both bullying and self harming behaviors in one session. This anti suicide assembly uses comedy to take on bullying as well as the self harming behaviors that can result from it. Keith deals with teen depression and the self destructive behaviors that may accompany it. Keith struggled with, and was victorious over, depression and self destructive behaviors in high school.   Keith’s story offers hope and a model for hurting students in the audience to follow: ask for help, build a team, life gets better.

Cutting, anorexia, bulimia, and suicide have reached epidemic proportions in our middle and high school populations.  Much of this is happening as a result of bullying and cyberbullying. The connection between bullying and teen suicide has been well documented at the middle and high school levels.  We need to do something about this.  Keith can help by showing how destructive bullying behaviors can be and by teaching students how to respond to bullying when they see it. Keith’s show, “Break Out of the Box”, is different from his regular anti bullying assembly in that he spends more time defining self harming behaviors, teaching students how to recognize and combat negative thoughts, and most importantly, encouraging those that are hurting to get help. Keith will make an impassioned appeal for those in the audience that may be engaged in self harming behaviors to reach out and request assistance. Think of “Break Out of the Box” as a serious comedy show that acts like a net.  It pulls out hurting kids.


"I have been in the Mental Health Field for twenty-eight years in a variety of different roles.  I have worked with several teams of psychologists, therapists, social workers, and psychiatrists and have NEVER EVER witnessed anyone in those disciplines diffuse the stigma that surrounds asking for help with the hope that you did.” - Keith Trott Director TBI/Mental Health Unit CT Valley Hospital

Teen Suicide, Self Harm, and Bullying Rates, are Staggering

According to the Center for Disease Control, suicide is the second leading cause of death for Americans between ten and twenty four.  That’s mind numbing. Four out of five teens that attempt suicide have given clear warning signs.  What if all the students and staff at your school knew what these warning behaviors looked like and what to do if they observed them? Students at your school would be safer. Teens need to get help if they are cutting, that’s a given. But shouldn’t students know what to do if they have a friend that is cutting and not seeking help? Why bring Keith in to address both self harming behaviors and bullying? Because they go together.

Yes, Addressing Suicide, Cutting, and Bullying Can Be Uncomfortable

Keith’s show, “Break Out of The Box”, deals with bullying, cyberbullying, suicide, cutting, and depression.  These are not cheery topics.  Though Keith uses uplifting comedy to deliver his message, the topics are what they are.  You may hear people say, “That’s not a problem here.” Or, “Do we have to do a school wide assembly? I’ve only heard of a few kids cutting.” Or, “We may have a few parents that are uncomfortable with this.”  Students need their leadership to be willing to be uncomfortable for them, they need leaders that will do the right thing even though it may be unusual.  They need you to help them deal with the world they live in, not the one you wished they lived in.  Teen suicide is preventable but we, as a culture, are not doing everything we can to prevent it. Take compassionate action on these tough issues and help the hurting by bringing Keith in. 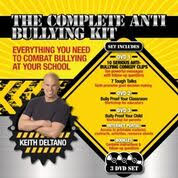 Do Something About the Suicide, Cutting, and Bullying Epidemics

You can reduce bullying at your school and combat the self harming behaviors some of your students may be dealing with.  Contact Keith for more information.

We brought Keith in to do a multi school/day tour in Southwestern Oregon.  Keith use of “serious comedy” really hooked the students and brought his positive message home. Keith was also extremely attentive to individual students who approached him after the assemblies.  Keith “hangs out” until he speaks with every student that wants to talk to him, no matter how long it takes.  During his tour several students with various mental health concerns reached out for help through Keith and school staff.  We are grateful for his caring manner.

You are one of the most gifted mental health and anti bullying speakers we have ever had.  Your combination of two tough topics was amazing.  After your assembly we had students contact the guidance office requesting help.