Keith’s virtual school shows will change school culture when combined with his curriculum to create a school wide anti bullying campaign.  He has performed anti bullying assemblies for high schools, middle schools and elementary schools throughout the nation. He is more than an anti bullying speaker – he is a lifelong educator. Keith uses serious comedy to engage students, teachers, and parents during his school assemblies, teacher workshops, and parent outreach events.  His experience as an award winning teacher and parent coach have turned him into one of the nation’s most requested anti bullying speakers. Keith addresses cyberbullying, physical bullying, racism, exclusion, verbal bullying, gossip, and the mean girl phenomenon. When working with older students he addresses heavier topics like cutting, teen suicide, teen depression, and the importance of seeking help for self-harming behaviors.

Keith Deltano emphasizes “It’s time for the drama to stop!”  He won the Teaching Excellence Award and was listed in the Who’s Who of America’s Teachers and Outstanding Young Men of America.  He was also awarded the National Impact Award for the impact he had on parents.  See more about Deltano at www.DontBullyOnline.com (photo by Alexa Stoia)

“The assembly was interesting: it spoke to a lot of kids who needed to hear it.” – Anthony Casiano

“Seeing that he took something that used to hurt him and used it as a way to help others was really inspiring.  He was helping other high school students that might be going through the same thing he did by telling his story.” – Sean Buel

“The anti bullying assembly made people realize that everybody is going through different things.  You shouldn’t exclude people because they’re different.” – Jaime Pillion.

The overall bullying assembly was good.  It was impactful because humor grabs the attention but the message he brings is what makes it great” – Mr. Clymer

“I liked his sense of humor.” – Brady De Angelis

“The most inspiring thing for me was that he managed to tell us the age old message, “Be nice to someone,” in a way that was entertaining to an assembly audience that has been told this same idea a hundred different times.” – Peter Depres

“The assembly was inspiring because it made me realize that everyone, no matter what their reputation is, has a story and may be hurting on the inside.” – Carrie Ann Callahan

Deltano, who dubs his interactive assemblies as “serious comedy,” draws on his own background to reach out and share with youth of all ages.  He told the audience that during his sophomore year in high school, he was nicknamed “Rock,” and even though he didn’t like it, he laughed along.

“Just because someone laughs along with something you say, doesn’t mean it doesn’t hurt,” Deltano told the crowd during the assembly.

Using this example as a springboard, Deltano drew applause as he encouraged individuals to embrace their own uniqueness in a culture where fitting in and normalcy are overrated.

He also addressed the more subversive dynamic of Girl Bullying: Guys might put you in the hospital, but mean girls put you in therapy,” said Deltano.

In a particularly humorous skit where he re-enacted the dynamic of his two young Children, Deltano demonstrated how bully-like behaviors can be fostered without either the victim or the bully realizing it.

His skit involved his daughter, age eleven, being protective over a stuffed animal, while his son, age four, enjoyed getting a reaction out f her by stealing it.  Deltano explained once he realized his son was getting joy not from stealing the toy, but form the reaction, he was able to help his daughter stop reacting.  In turn, his son stopped stealing her toy.  The reaction, after all, is what bullies want, Deltano explained.

“But you can’t be letting them live in your head,” he said.  “Don’t give them a reaction.  It is time for the drama to stop!” 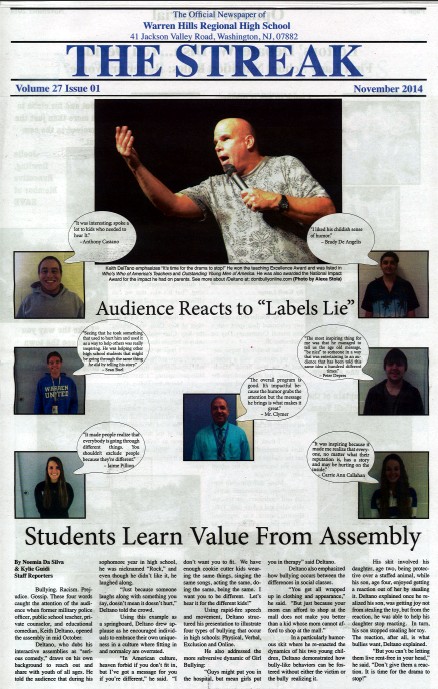 Keith can adjust his virtual assemblies to fit the needs of high school, middle school, and elementary school students. 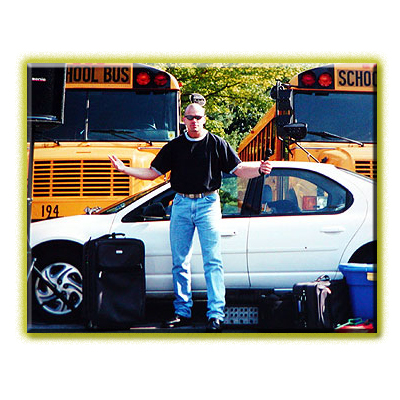 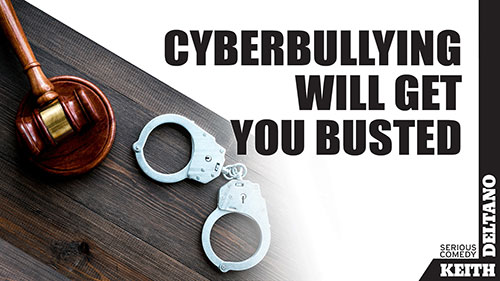 "You are one of the most gifted anti bullying speakers for schools we have ever had and you touched many, many, students. The impact of your presentation on the students was amazing!"

“After Keith performed his anti bullying assemblies for our middle and high schools we implemented his curriculum, we have seen a decrease in bullying / harassment problems during the year.”

“One of the best anti bullying assemblies for elementary schools we have ever seen.”

“Keith’s anti bullying program captivated the attention of students Kindergarten through twelfth grade. He was funny, interesting and straight forward.”

“The kids really loved your anti bullying program, they really got the message! The teachers only had great things to say! It was a delight to have you here!”

The most impactful and engaging youth presenter I have ever worked with! Keith is perfect if you are looking for virtual school assembly ideas.

“Thank you for coming out to Alaska and being so flexible. You were a big hit with the students and staff. Your message was awesome and the curriculum you provided will keep the positive momentum going!"